What is Salary Sacrifice and is it still relevant?

One in five Australians suffers with a mental illness.Though, Chelsea Pottenger was the last person anyone thought would contemplate ending her own life. The former corporate high-flyer had always been a happy, optimistic, go-getter but suddenly found herself consumed by severe perinatal depression after the birth of her first child. This left her unable to cope with the pressures of being a new mum and left her questioning her purpose in life.

Bankruptcy: can creditors take your super?

The interaction between bankruptcy, creditors and super are neither intuitive nor widely understood. In this article we explain how an individual’s super could be affected if they become bankrupt.

Any super benefits an individual receives before entering bankruptcy are available to creditors. In addition, any assets purchased with those benefits can be claimed and used to pay creditors.

Aussies are feeling the pinch in the lead-up to payday, with a new report revealing many of us are forced to change our spending behaviours in anticipation of the next pay cycle.

Xero’s Payphoria Study surveyed 1,000 nationally representative respondents and found that as a result of these struggles, the rush felt on payday, or what Xero has coined as “payphoria”, is very much real.

This month we wish Happy Birthday to Dee! 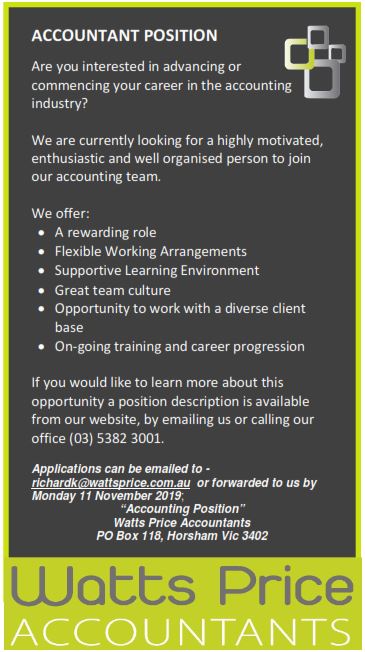 Lately we have noticed that some clients are receiving Land Tax Notices from the State Revenue Office when they shouldn’t be. This is because farmland and your home is generally exempt.
The State Revenue Office has advised that it is the land owners responsibility to report any errors in assessments and they can do this via the hotline 13 21 61 or via email at sro.vic.gov.au/contact.
If you receive an unexpected Land Tax Notice we advise that you query it in the first instance as it can be quite time consuming trying to get a refund from the State Revenue Office, as a few clients have recently found out!
If you have any queries please contact your Financial Adviser or our office on 03 5382 3001 or email at mail@wattsprice.com.au

All the best from the Watts Price Team!